About six months ago I stumbled across this video recipe for preparing a sort of cabbage omelette. It’s quite simple and takes about 20 minutes to prepare. The trickiest part is flipping the omelette midway through cooking. If you happen to have a two-sided omelette pan like in the video, it’s straightforward. If not, you can invert a dinner plate on top of the frypan, carefully flip over both the plate and pan together leaving omelette on the plate, flip back the pan and set on the burner, and finally slide the now flipped omelette off the plate and back into the pan.

We’ve been pretty committed cord-cutters for a number of years now.

That typically put us on steady diet of Netflix and Prime Video.

This little gizmo, for better or worse, has opened up a new world of over-the-air broadcasts. Before stumbling on it, over-the-air tended to be highly failure prone, in the form of degraded reception during our favorite shows. Since adding the filter, picture drop-outs while not completely gone have largely become a thing of the past.

One of my favorite new discoveries is Localish.

It’s been a while. How have you been?

This morning I saw a great piece linked from Hacker News called People don’t work as much as you think. It’s a terrific read. For me the salient idea is that there are different types of work, and a work day will often be a composite of those types of work. Perhaps some fractional part of the day will be what the author calls “hard thinky work”. At best it will be a couple of hours and the rest will fit into some other pigeon hole. And that’s ok.

I paid a visit to my dentist this week.  As I sat in the chair having a sort of half-conversation with her, tubes and picks sticking out of my mouth, it struck me how both unusual and applicable dentist chair conversations are.  Have you ever had a conversation where you’re completely engaged with an idea and just can’t get the words out fast enough, your mind constantly racing ahead?  The pitfall in these situations is that you don’t take the time to listen, appreciate and react to the ideas of the person you’re conversing with.  The conversation may become one-sided, the other person politely nodding their head, hopefully amused by your enthusiasm.  The dentist chair turns the situation around, forcing you to communicate nonverbally, listen and think for a minute or two before your next opportunity to slip in a word or two before going silent again.  So if you think you might be prone to rambling on a bit and want to change that, during your next conversation just imagine that you’re sitting in a dentist chair.

Here are two recent experiences I had with software, that represent a great experience I’d like to see more of:

I made my first flan this weekend — from Jaques Pepin’s recipe.  It’s been in the fridge overnight.  The big unmolding happens soon!  I’ll post a follow-up picture when that happens.

In other news, I’ve updated the software that runs this blog and am testing it out.  I’m also pondering, given the alternative places to write and reach people on the web, how I want to engage going forward.  I definitely want to continue to write on my own domain.  WordPress was a great tool for that ten years ago.  Is it the best tool for that now?   We shall see.

Postscript: see picture below.  The flan split on one side as it came out of the pan.  There are paper towels everywhere because the caramel spilled out when I flipped it.  Looking forward to tasting. 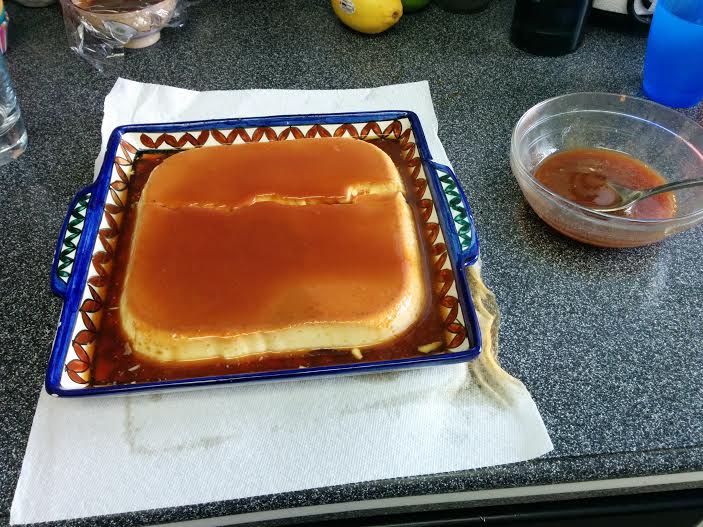 I spent some time last night wrapping my head around how bitcoin works.  Here’s a summary that I wrote up for a friend earlier today. The summary is a bit on the technical side.

The heart of the system is a global, public ledger listing all transactions on the network.  The ledger is called the “block chain”, a term derived from the underlying tech.

Balances are held by ‘addresses’ which function much the same way as bank accounts.

Transactions are committed in batches called “blocks” about every 10 minutes.

Imagine you’ve joined a startup as the tech lead. The founder has a prototype, which she built with a contractor. Conveniently, the contractor hosted the code on github, so you fork the repository and you’re off and running. Months of building go by. The contractor, while still friendly with everyone, has moved on.

One day, you go to push your latest commits to github, and you get an error message that the remote repository cannot be found. You log into github, and the repository is gone. All traces of it have disappeared.

What happened? It turns out that Github treats private repositories in a special and unexpected way: private forks disappear when their ancestor is deleted from github. So when the contractor, needing to free up space in his account, removed the prototype repository, all its children went with it. Caveat emptor.

This might sound scary, but since every git repository carries its history, it’s actually pretty straightforward to recover so long as you have an up to date clone of the repo handy. Here is the procedure:

Try this some time: when making spaghetti, use half regular noodles and half whole-wheat noodles.  The latter have lots of fiber making for a hearty and filling meal, but for most sauces I find them to be a little too heavy.  Cutting the whole wheat with regular pasta gives a light taste while retaining some of the good stuff.  My kids, who normally eschew all things fibrous, barely notice the difference and happily wolf it down.

One more test.  Sorry for the empty content flow.  But if it works out, the net result will be more and better flow.  How about them apples?

Views expressed here are my own and not those of my employer.